My in-laws arrived Tuesday! We don't know why, but for some reason, our pets are not fond of Jeff's dad--or if they are, they have a funny way of showing it.

Years ago, in our very first house on the bench in Boise, our cat Rushie clawed the Be-Jesus out of Bud's private area if you know what I mean. He was sitting at the table eating, when all of the sudden he tried to leap straight up out of his chair hitting his knees on the table and yelling something like "Oh holy, **)(*&^%^$!!"

A few years ago, our kitten Clover got shut in our walk-in closet. Bud had left his suitcase laying on the floor, open. Apparently, Clover decided it was the closest thing to a litter box she could find and relieved her self. Lovely.

And just the other night, our dog Belle scarfed up a can of Pedigree chopped beef and finished off the Salmon pate' the cats didn't eat and promptly threw up the entire contents of her stomach right into Bud's crotch while he was sitting on the couch. In the pandelerium that followed, Isaac threw up under the tree from the stench, I gagged so hard I tinkled my panties and we all laughed so hard it was ridiculous.

I have no idea why Bud thinks it's a good idea to visit us....but I'm glad they are here. We had a wonderful Christmas!
Posted by Julie Summers at 10:54 AM 2 comments: 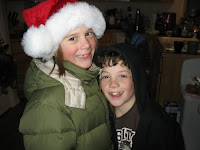 Isn't it great to watch your kids (or kids in general) around this time of year? Their eyes are shiny and they have a perpetual silly grin on their faces. My kids have been spending hours out on the hills by the pond sliding down onto the ice in their sleds. Their little red noses and cheeks are so cute! Then they troop in the house (with several friends) dripping snow and snot everywhere wanting hot chocolate. I love it!

Yesterday I made lavender sachets from the plant I harvested. I asked
Ben and his little buddy Kolin to deliver them to our neighbors with cards attached. Ben put on his Santa hat and told Kolin he would be Santa, and Kolin could be his elf. Because Kolin is such a little sweetheart, he readily agreed. They traipsed around the block ringing doorbells and saying "HO HO HO" as they gave out the items.

Isaac's friend Anthony stayed with us last night and he told us he's pretty sure he's getting what he wants because his mom has been acting happy and told him it he was going to be so excited Christmas morning. Kids are so fun to talk to. They are honest and you never have to guess how they feel. For example....we asked the kids if they wanted to go to Chuck' A Rama today and Anthony said, "Actually, if you don't mind, I prefer Golden Corral." Isn't that funny?!

It snowed last night and the kids can't wait to get out there! Have a great day and relax and enjoy the season....let some stuff go that doesn't really matter. Hug your husband and kiss the kids. Pet the dog and scratch the cat. Sit down and look at your tree. Let people know how important they are to you. XOXO
Posted by Julie Summers at 9:07 AM 1 comment:

Jeff brought home my present today and I am so excited! It's a brand new white iphone!! I am downloading my music to it right now. Previously I had a shuffle. Yep. My kids had better ipods!! Plus it does a billion other things--GPS, web, camera, text, email, etc., etc., etc!

Christmas Time in The City

Yesterday I spent my day with seventy 5th and 6th graders. The Rockin' Ross Raptors is Isaac's choir, and we spent the day traveling all over the valley to spread Christmas cheer with music. We started at Ben's school, Ross's sister campus, then headed to Boise and sang around the tree at Boise Centre on the Grove. It was 7 degrees. I thought I was in Salmon again! The kids were troopers though. Jeff walked down from work and took a listen. Isaac was glad to see him.

From there we invaded the Golden Corral for lunch then sang to the crowd before leaving. We finished off with the Kuna Senior Center. That one was my favorite. Old people are just plain super. They got so much joy from the music and the kids with all their energy (a.k.a. over enthusiastic ringing of the jingle bells!), their faces were just radiant!

I really enjoyed being with Isaac and his buddies. He is getting so old and mature, but he still loves to hug me and spend time with me. People say that these times go fast and pretty soon he will be a surly teenager and think I am the dumbest person alive and won't spend any voluntary time with me. I hope that is not the case, but if it is...I'll cry!
Posted by Julie Summers at 5:47 AM 2 comments: 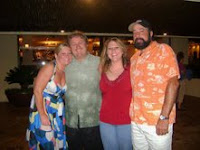 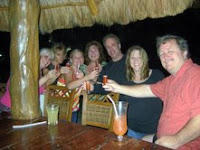 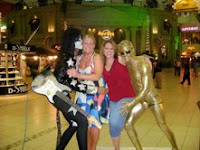 Here are some of the pics my friends took in Cancun. The one of us sharing shots the ocean is right behind us, but you can't see it! The one of Kristine, Steve, me and Pete and the one of us with Kissman and Goldman is the night we went to the disco. Good Times!
Posted by Julie Summers at 4:56 PM 1 comment:

Remember my blog a few days ago about monkeys, etc. on airplanes? The following articles confirm the lunacy!

SPOKANE, Wash. (AP) -- A Spokane woman and her mother have been convicted in federal court on charges of sneaking a rhesus monkey into the United States from Thailand. Gypsy Lawson, 29, hid the sedated young rhesus macaque under her blouse, pretending to be pregnant when she successfully passed through U.S. Customs in Los Angeles after a trip to Bangkok, Thailand. Her mother, Fran Ogren, 55, of Northport, Wash., also went on the trip in November 2007. The two women were found guilty Monday by a 12-member jury on separate charges of conspiracy and smuggling goods into the United States. Sentencing is set for March 3. The monkey is now at a primate rescue facility in Oregon.
---

CHANTILLY, Va. (AP) -- U.S. Customs officials at Dulles International Airport discovered the charred carcasses of three monkeys in the luggage of a traveler arriving from Central Africa. The monkeys have been confiscated are being examined by the Centers for Disease Control and Prevention. Customs spokesman Steve Sapp said a trained dog alerted authorities to the man's bag on Friday. The luggage also contained deer meat and dried beef, which has been destroyed. Sapp said it's not unusual for foreign visitors to bring exotic foods to the U.S., but he says the discoveries were "a first." After the confiscations, the man was allowed to enter the U.S. The monkey carcasses were inadmissible under U.S. law. Monkeys can transfer infectious diseases to people.
---

Now that, my friends is news!
Posted by Julie Summers at 10:04 AM No comments:

The news is so incredibly stupid today. Granted, I am on my last nerve and want to shoot everybody I talk to, but really--the news is as dumb as I've ever seen it and I'd feel this way even if I weren't homicidal.

The following caught my attention--

Researchers in London have discovered that dogs have emotions. And maybe horses too. Really?

Micron will no longer be supplying tissues for their employees. Surprised.

Oprah is lamenting her weight. Who isn't?

How To Tell If You're Rich. Look at my bank account? Duh.

Illinois Governor corrupt! Wow. That is amazingly hard to believe.

People who get cold sores have a huge chance of ending up with Alzheimer's. Dementia here I come!

Man killed by being wrapped in a paper bale in Boise was drunk. Hmmmmmm.

And last but not least: Smart men have better sperm count. And I quote:

The smarter the man, the higher the quality of his sperm, new research published in the journal Intelligence shows. But women having difficulty conceiving shouldn't question their partner's intelligence and men who aren't quite geniuses should not worry about their ability to father children(ever been to Alabama?), lead researcher Rosalind Arden of Kings College London told Reuters Health.

Amen sister!
Posted by Julie Summers at 1:58 PM No comments:

I was researching airline pet policies for a client yesterday and came across some funny stuff. You gotta laugh because it wouldn't be in the regulations if they hadn't had an issue with it in the past...

Only warm-blooded mammals and birds considered to be personal pets or show/exhibition animals will be accepted.
Primates, including lemurs, monkeys, orangutans, gorillas, and chimpanzees will not be permitted (unless a service animal).
Animals must be considered non-offensive and not dangerous to passengers or baggage handlers.
Cats, dogs, household birds, guinea pigs, rabbits, hamsters, and marmots are accepted as checked baggage, not cargo.

When was the last time you travelled with your marmot? Have you tried to get your non-service orangutan on board on the lowdown? How do you go about getting your gorilla to act non-offensive?

It's the middle of the night. I can't sleep. I took some cough syrup and crashed at 10pm, but woke up an hour ago ready to roll! This is so dumb.

Well, so how are you? Sheesh. I've read all the news websites, checked email, checked woot.com to see if they had anything I couldn't live without. They didn't. Checked the bank account. Scratched the lotto ticket I bought for tomorrow's lunch hour entertainment. Now what am I going to do at lunch?

It is so damned foggy! I love it. Belle doesn't. She will hardly step out to do her business.

Jeff is my hero--he finally got the Internet connection to work upstairs again. Yay! Having it in Isaac's bedroom really slowed down everything, but now, the laptop gets excellent reception and I don't have to wait precious extra seconds for pics and stuff to load! I want it NOW!

Oh yeah. Thanksgiving. We went to Salmon. Jeff and I got in a fight and I spread Cheese Whiz on his face and then that made him really mad. Jeez, it's just cheese dude! (Look at all the Zs I used in that last sentence!) Anywhoo, we made up and had a nice holiday. Took in the annual Christmas Lights parade Friday night, but skipped the famous Cheerleader's Bazaar this year. Just wanted to get back home and have a day to ourselves. We stopped at Loews on our way home and I bought a new vacuum and Jeff bought a multimeter. We were both happy :)

Well, I am getting a bit drowsy now. I am going to be so tired tomorrow. I am like a princess with sleep--if I don't get it, I turn into a bear raging around clawing everybody. I suggest you don't come see me tomorrow!!
Posted by Julie Summers at 1:46 AM 1 comment: