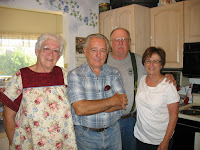 Last week I drove to Salmon to pick up my dog at my parents house. She had been there for two weeks and I was missing her so much! The boys and Jeff were sick of driving after our big trip, so I went alone. It's not bad driving 6 hours by yourself. I just get a book on CD and hit the road. While I was in Salmon, I got to see my aunt and uncle from Texas and my other aunt from Spokane. It was fun to visit with them as I seem them only every 5 years or so. I also went to see Gma Bea in her nursing home. She is hanging in there at 96. She knew me this time, so that was nice. We talked about her past and had a nice visit. It was a good day for her. I also dropped in to see my Gma Mary. She is fit as a fiddle and looks the same as she did 20 years ago I swear! I had lunch with Jeff's folks and it's always good to see them. I stayed with my seester Jenny and we had a great visit too. They took me to dinner at the Junkyard Bistro and it was fabulous! If you visit Salmon, go there!

Today and tomorrow are the last two days of summer for me and the kids. They go back Friday and we are all ready! Even though the boys play well together, they've been bickering and fighting and are ready for some serious separation! They go to different schools, so it will be good for them to spend some time apart.

Today is haircut day. I just had 4 inches cut off and don't feel so much like a sea hag now! The boys go in at 3pm for a trim only. As you can tell from some of the pics on this blog, they are growing their hair out. Isaac is shooting for a squeeb (a hair style on Rock Band), so that means we have to let the bangs grow almost to his chin. Ben just wants to have his the way it is right now. I've decided to let them pick their own hair styles. It really doesn't matter in the whole scheme of life what their hair looks like. And besides, it's cute and different than everybody else, and I'm all for being different!

Another quest I've been on and finally won is a war with squash bugs in my garden. They decimated my pumpkins while we were in Oregon and started in on the crook necks and zucchinis. I put a stop to that as soon as I could and after spraying every other day for a week, I won! The guy at Zamzows said the cool spring cut back on earwigs, but made a perfect environment for squash bugs. I was glad to have fewer earwigs, because they almost killed my butterfly bush last year.

What other boring news can I share? I seriously wish we were friggin rich so I could have a maid and chef. Since I can't, I guess I'll wrap this up so I can clean and cook. I hope you all had a fantastical summer!
Posted by Julie Summers at 11:03 AM

Hey i tried those Books on CD for those long drives, But I bought a best of collection of Bedtime Stories, Fell asleep and drove off the road going to Bend Oregon. I say let that Hair Grow on those Boys and shave yours off for a change. That would be different all around now wouldnt it. My kids start school next week, Ava is excited, Tess not so much. Funny how different they are. Now that Summers over, we should all get together and talk about how we wished we would have gotten together this Summer and did something exciting.